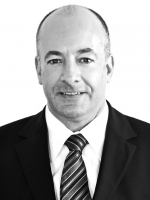 Paul Burgess has held the posts of President, CEO and Director since February 2005. He joined Lattice predecessor, Science Dynamics, in March 2003 as COO.

Previously Paul was president and CFO of Plan B Communications and prior to that he was responsible for the coast to coast development of networks for MetroNet Communications. In addition Paul oversaw development and deployment of the distributed computing strategy for ISM, later acquired by IBM Global Services.