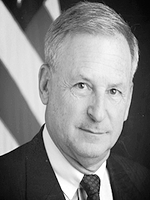 Mark Rosenker was chairman and acting chairman of the National Transportation Safety Board (NTSB) from 2005-2009. He retired as a Major General in the U.S. Air Force Reserve in December 2006 after 37 years of combined active and reserve service. During his Air Force career, Mark served as Deputy Assistant to the President and Director of the White House Military Office, where he was responsible for managing the military assets and personnel supporting the President and Vice President.

Prior to his NTSB role, Mark was Managing Director of the Washington Office of the United Network for Organ Sharing. Earlier, he served 23 years as Vice President, Public Affairs for the Electronic Industries Association. His government service spans the Department of the Interior, the Federal Trade Commission, and the Commodity Futures Trading Commission. Mark’s Air Force awards and decorations include the Air Force Distinguished Service Medal with One Oak Leaf Cluster and the Legion of Merit. He is a former member of the Board of Visitors to the Community College of the Air Force. In addition to graduating from the University of Maryland, Mark is a graduate of the Air Command and Staff College and the Air War College.